This is a small selection of plants that can be found in the collections of Meise Botanic Garden and that can be considered as African ‘orphan crops’.

The oil bean tree is found in the southern rain forest zone of West Africa where it grows wild, having never been cultivated to any real extent by individuals around homesteads or commercially in plantations.
Fruit is called ugba in Nigeria.
Oil can be extracted from the seeds, with a content of up to 44% of protein with an ideal amino-acid composition and many minerals.
Also attracts the edible caterpillars of the silk moth.

Piper guineense = West-African or Ashanti pepper
Piper guineense native to topical regions of Central and Western Africa and is semi-cultivated in countries such as Nigeria where the leaves, known as uziza, are used as a flavouring for stews. Local cultivation also takes place in other West- and Central African countries.
Consumption is now limited to Central and Western Africa, but it used to be popular in Europe in the Middle Ages.
Apart from being an appreciated aromatic plant, it is also usefull as preservative for the conservation of e.g. catfish. Aframomum melegueta = alligator pepper, grains of paradise
Indigenous in swampy areas of West-Africa.
Now used in the cuisines of North and West Africa, it used to be popular in Europe. Mentioned already by Pliny the Elder, it got forgotten in Europe but was rediscovered in the 14th and 15th century as a substitute for black pepper. Up to the 19th century, it was imported in large volumes to European countries.
This hot spice nowadays starts getting more appreciation again in both African and Western cuisine. A famous American television cook, Alton Brown, mentions it in the show ‘Good Eats’.
In West-Africa, it is used for its aromatic and medicinal values.
Cultivation:
Aframomum melegueta is reported to be cultivated in West-Africa, India and the Caraibean area. A detailed study on the cultiviation in forested regions of Southern Ghana (Ashanti region) was published in 1977. (https://www.jstor.org/stable/4253855?seq=1#page_scan_tab_contents).

Bixa Orellana: the lipstick tree
Originally from the tropical regions of the America’s, this tree is now mainly cultivated in Brasil, Peru and Kenya. Peru is the largest exporter, followed by Kenya. Peru is the largest exporter of annatto seed, annually about 4,000 tons. Côte d’Ivoire and Angola are also exporters.
Main industrial use: oil extracted from the seeds is used as food colorant for cheese, margarine etc.
In Latin-American cuisine, it’s also used for colouring dishes. Other uses: skin protection, insect repellent, textile dye.
Arthocarpus heterophyllus = Jackfruit 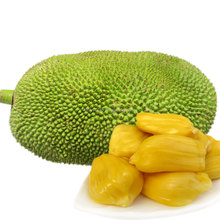 Being native to West-India, this tree is now found in several African countries: Uganda, Kenya, Central-Africa …. In most Asian and African countries were it is grown, it is still largely a neglected and under-valued crop.
However, it has many qualities. It produces the largest tree-borne fruit. It’s fast growing and can start producing fruits after three years. It’s rich in minerals, flexible when it comes to climate, can be grown without pesticides … .
Researchers if the ICAR (Indian Council for Agricultural Research) promote the fruit for its potential in fighting food insecurity. In an article it is described how value-adding can change the faith of  the jackfruit from a neglected crop to a major factor in fighting food-insecurity and even a replacer of staple foods like wheat and corn, where these are under treat due to climate change. In Vietnam and Sri Lanka, jackfruit is processed into noodles, flour, ice-cream and more.
Monodora myristica: the African nutmeg

This tree is most common in the forests of West-Africa, but is also found in East Africa (Uganda, Kenia). 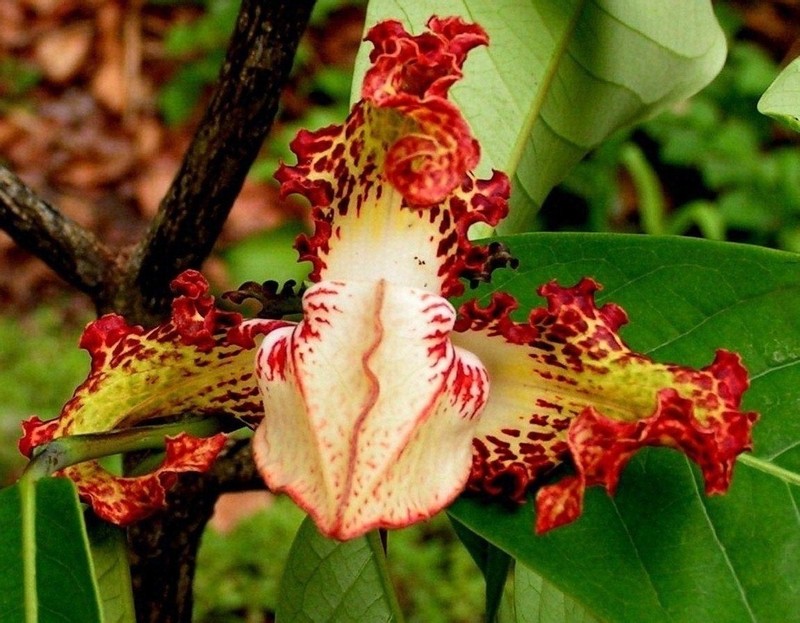 It caries large berries that contains up to 120 seeds that have a taste similar to nutmeg. It has both aromatic and medicinal values.
The tree is cultivated for its ornamental qualities (orchid-like flowers). However, trees seldom set fruit when cultivated because they lack the beetle that normally pollinates them in the wild.

One of the two ancestors to all varieties of bananas and plantains we eat (the other is Musa accuminata).
Worldwide, there are approx. 500 banana and plantain varieties, but almost all bananas grown for export are of the variety Musa accuminata Cavendish. The other varieties are mainly grown for local consumption.
Bringing new varieties on the global market could have major advantages:
People around the world could discover new and delicious tastes.
The threat of diseases would be mitigated.

Phytelephas macrocarpa = tagua nut, vegetable ivory
The seed of this palm, endemic to the coastal regions of South America, can be used in a similar way as ‘real ivory’.  A global antipathy to the trade in elephant ivory has led to renewed interest in the sustainable resource of vegetable ivory. Tagua is becoming sought after for buttons on clothes, small carvings and for use in jewelry such as watches, earrings, bracelets, and necklaces. The nut is a nutritious food when ground up.
Tagua nuts are mainly gathered in the wild in South America. In order to protect the plant in the wild, researchers investigate possibilities for controlled germination and cultivation

This tree is traditionally valued in many African countries, both for its symbolical, nutritional and medicinal value. The fruits and leaves are eaten, seeds are roasted as a coffee substitute or for making an edible oil with a pleasant taste.
The ripe fruit being particularly rich in Vitamine C and B2, is nowadays promoted as a ‘superfood’ on the European market. The grounded powder of the ripe fruit is sold for prices up to €50 per kilo.

Other names: miracle fruit, miracle berry, miraculous berry, sweet berry and in West Africa, where the species originates, agbayun, taami, asaa, and ledidi.
This West-African shrub is famous for its berries, that contain ‘miraculin’. This molecule binds to the tongue’s taste buds, causing sour foods to taste sweet for as much as half an hour after having swallowed the fruit.
The berry (or, more often, tablets made out of the berry, as it is not easy to find it fresh on the market) is now enjoyed as a ‘taste trip’ by partying people around the world. It might however have more ‘serious’ applications in the future, e.g. giving diabetes patients the possibility to enjoy a sweet taste without doing any harm to their health.