15-20 August 2016. Kenya. AFLANET: Aflatoxin Networking on Aflatoxin Reduction in the Food Value Chain. The goal of this project is to establish a long-term network be-tween scientific and development partners in Kenya/East Africa and Germany to address the reduction of aflatoxins in the food value chain. It is funded by German Ministry for Food and Agriculture (BMEL) (Project Duration: 01.07.2016 – 31.07.2017).

At the beginning of the project a study tour of 5 days to various stakeholders in the agricultural production chain, visits of acreages for maize and visits to research institutions and laboratories was organized. The aim was to evaluate which groups and projects are working on aflatoxin minimization and which parameters of minimization strategies for aflatoxins in maize and dairy products are already established and applied. The purpose is to develop

intense and long-lasting contacts between German and Kenyan actors in the agricultural feed and food sector.

Solutions for a long-term aflatoxin minimization in the diet of the Kenyan people were to be identified by visiting the circumstances in Kenya and a subsequent workshop, and thus to contribute

to secure food and feed. The excursion considered the priority research objectives in this project and established contacts with key actors in the agricultural food
sectors who are convinced of a fruitful future collaboration. By means of these contacts current research issues were gathered dealing with aflatoxin contamination in the food value chain in Kenya.

The following institutions are involved in the Aflanet project:

For the last day approx. 10-12 representatives from research institutions, projects, stakeholders of crop production, storage and processing facilities as well as from consumer protection associations were invited to participate in a one-day-conference in order to generate the necessary further research.

Related PAEPARD blogposts:
Aflatoxins in Eastern Africa. This special issue of AJFAND is a contribution to better understanding several aspects of the multi-faceted problem of aflatoxins, focused on East Africa. 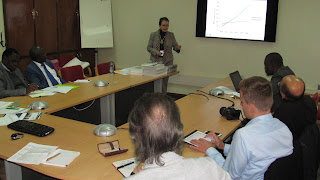 16 August 2017. The BecA-CSIRO aflatoxin project (Commonwealth Scientific and Industrial
Research Organisation – CSIRO, Australia) has established a lab, procedures and a network of partners that has focused on gathering information on and coming up with a set of interventions to reduce aflatoxin risk. These include sampling/testing procedures (see policy brief), as well as decision support tools for the wider community.

Visit to the Aflasafe Modular Manufacturing factory at KALRO Katumani. 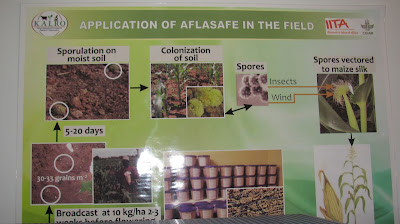 17 August 2016. Machakos. The Kenya Agricultural and Livestock Research Organisation has put up a laboratory to conduct research on the mycotoxins in the East Africa region. KALRO constructed a modular (small-scale) plant to manufacture Aflasafe KE01, a biopesticide to control aflatoxin, one of the most prevalent mycotoxin in the region.

The construction of the regional mycotoxin laboratory was supported by the World Bank which rehabilitated an existing building at the Katumani center while the equipment was provided by USAID through the Aflatoxin Policy and Program for East Africa (APPEAR) project, and USDA-ARS. It will be used for surveillance and monitoring of aflatoxin contamination as well as for developing biocontrol agents for aflatoxin management in Kenya and the Eastern African region. The total investment for this laboratory facility amounted to US$170,000.

Aflasafe KE01 was developed in partnership with KALRO, IITA, USDA-ARS, AATF, ACDI/VOCA, and the National Irrigation Board (NIB). These partners are also behind the construction of the modular plant which will cost US$800,000 and produce the biopesticide for the region. Currently the plant will be run by KALRO with technical backstopping
from IITA but it is hoped it will eventually attract the private sector for wide-scale production and distribution of the product. 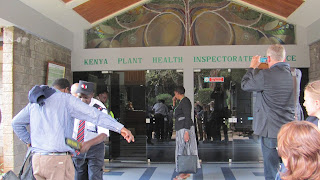 18 August 2016. Nairobi. Visit to KEPHIS offices to discuss phytosanitary issues especially in regards to exporting samples to Germany for testing 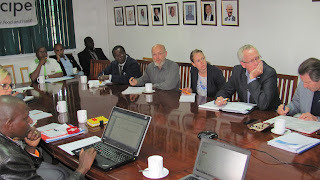 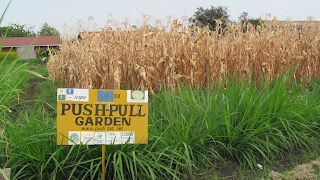 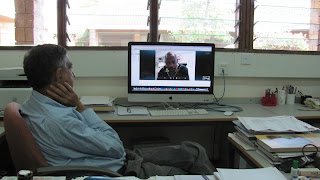 icipe’s recent observations indicate significantly reduced attack of maize by ear rots and mycotoxins with the push-pull technology, implying potential contribution of the technology to food safety. This presents an opportunity of managing the killer disease using a simple technology that also addresses a host of other production challenges affecting smallholder farmers. There is thus an urgent need to establish the underlying mechanisms by which the technology controls mycotoxins, principally aflatoxin, and to put in place approaches to ensure exploitation of the benefits of this system.