In 2010 African countries spent more than 12.5 billion US$ to import of 32 million tons of wheat. Demand for wheat in Africa is growing faster than for any other food crop. This will be a major challenge particularly in cities, where urban population growth is forecasted to increase by 300% by 2050.

Several countries could achieve wheat yields exceeding 6 t/ha (compared to global average of
3t/ha). But many challenges prevent countries from realizing this potential.

The conference topics were:

Declaration by the participants: 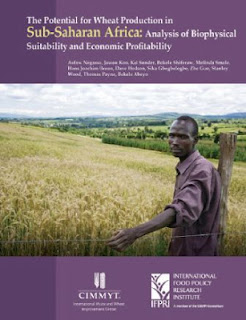 A 89-page study, Africa’s wheat potential (2.5 MB) issued at the wheat conference in Ethiopia, said it aimed to identify ways to raise wheat production as “a hedge against food insecurity, political instability and price shocks.”
This report, examining environmental conditions of 12 nations from Ethiopia to Zimbabwe, said that farmers south of the Sahara grew only 44 percent of the wheat consumed locally, meaning dependence on international markets prone to price spikes.

“Sub-Saharan Africa has extensive areas of land that are suitable for profitably producing wheat under rain-fed conditions,” according to the study by the non-profit International Maize and Wheat Improvement Center.

It said countries in the region were producing only between 10 and 25 percent of the amounts that the Center’s research suggested was “biologically possible and economically profitable” with a net return of $200 per hectare (2.5 acres).

“Wheat is not an African crop, it is not a tropical crop (but) many governments want to produce wheat locally instead of paying for imports,” Hans-Joachim Braun, director of the Center’s global wheat program, told Reuters by telephone.

The report estimated that African nations would spend about $12 billion to import 40 million tonnes of wheat in 2012, particularly for fast-growing cities. More wheat should not be grown at the expense of other more viable crops, Braun said.

ABSTRACTS: Available by country upon request