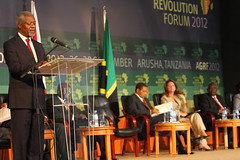 26 – 28 September 2012. Arusha, Tanzania. The African Green Revolution Forum (AGRF) in Arusha has concluded with the production of concrete actions to transform Africa’s agricultural sector. African heads of state, ministers, private sector representatives, the international community and farmers united on the roadmap for increasing agricultural productivity and income growth for the African agricultural sector, with support for smallholder farmers at the centre of all solutions. 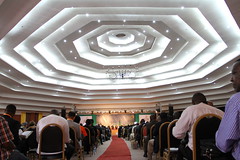 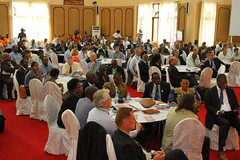 At his closing remarks at AGRF 2010 in Accra, Kofi Annan declared that the continent had arrived at the “tipping point” in the challenge of scaling up Africa’s Green Revolution. Two years on, the AGRA Chair is convinced that agriculture in Africa has begun to accelerate beyond the tipping point, stating that there has been a rising level of interest and action to improve the agricultural policy environment.

“Public and private investment in agriculture increased, due to better policies and regulatory measures”, he said. “We have seen greater small-holder access to improved, higher yielding seed of stable foods, and to more affordable fertilizer and better techniques for its application, such as microdosing. Significant investments have taken place in large breadbasket areas in Ghana, Mali, Mozambique and here in Tanzania, as well as in several agricultural growth corridors”. 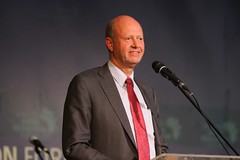 Following recent discussions at the World Economic Forum (WEF) Africa, the G8 and David Cameron’s Hunger Summit, the African Green Revolution Forum is seeking ways to unite the power of the public- and private-sectors in the global food security efforts. Yara President and Chief Executive Officer, Jørgen Ole Haslestad, who is the co-chair of the Forum, said the AGRF serves as an important incubator for innovative solutions to growing the African agricultural sector.

“Public- and private-sector leaders are joining forces in unprecedented ways to ensure a more food secure future,” he said. “We have seen great success when players come together and invest strategically – we hope to build on new momentum and work together to transform agriculture in Africa.” Commenting on the success of the forum and the critical next steps, AGRA President, Jane Karuku stated that “the international community is beginning to realize that the smallholder is an entrepreneur, and that farming is a business.

AGRF inspired tremendous discussions and developed actionable plans to bring us closer to achieving food and nutrition security. It is critical that we move forward with these real, practical and pragmatic actions at the farmer-level, not at the office-level.” President Jakaya Kikwete has strongly defended the need to scale up investments and innovation for sustainable agricultural growth and food security in Africa by putting at the centre of agriculture smallholder farmers whose production and productivity is low.

The government of Tanzania is planning a mechanism which will ensure all agricultural meetings and workshops are held in places where farmers will be given opportunity to participate directly in initiatives and discussions involving the relevant issues for implementation.