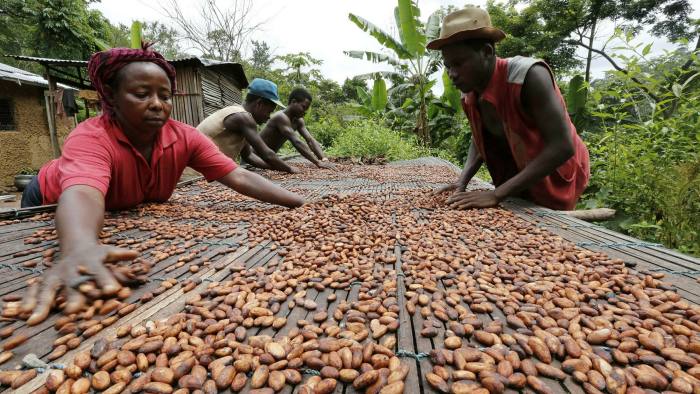 Ghana and Ivory Coast have hit out at several big chocolate companies and traders including Mars, Hershey and Olam, accusing them of trying to circumvent a premium on cocoa meant to help fight farmer poverty in west Africa.

The accusations by the two countries, which account for more than 60 per cent of global cocoa production, mark an escalation of a tussle between nations that grow the key chocolate ingredient and the confectionery industry. In a letter seen by the Financial Times, the two countries accused the chocolate producers of trying to avoid a $400-a-tonne “living income differential”, or LID, that is added to the price of cocoa bought from Ghana and Ivory Coast.
(…)
Sustainability has become a key part of how chocolatiers market their products in the west. Both the EU and UK are considering rules that would outlaw importing products and commodities from illegally cleared land, while Germany is considering a due diligence law for supply chains. The $400-a-tonne LID was announced last year by the Cocobod and CCC as a way to lift the incomes of the largely impoverished, mostly smallholder farmers who produce most of the main ingredient in the world’s $100bn chocolate industry.