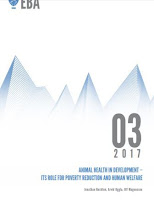 The presentation of the report was a starting point for a discussion on the role of animal health in order to meet, in particular, SDG goals 1 and 2 and if and how to export Sweden’s competence in combining a limited use of antibiotics with high productivity and animal welfare.
The review of policy and position documents from Swedish and international aid donors make one thing obvious: animal health is not a primary target. At best, it may appear subordinate to agriculture in a broad sense. In some cases, the links between human and animal health are pointed out, but usually from a human perspective and including the role of animals in the transmission of zoonotic and drug resistant microorganisms to humans. (page 60 of the report). The livestock sector looks as the biggest loser in the currently changing international aid strategies – and in the poorest countries’ economic policies (page 63). The agendas of most organizations are focused on the empowerment of women and on sustainable agricultural development. Again, few of them are referring specifically to animal health. (page 66).
Resource:
Animal health in development – its role for poverty reduction and human welfare
Jonathan Rushton, Arvid Uggla and Ulf Magnusson
Expertgruppen för biståndsanalys (EBA) 2017, 95 pages
Animal health deserves more of our attention. The absence of adequate animal health systems places a heavy burden on individual animal farmers, who, on their own, might find it hard to take necessary action to prevent the spreading of diseases. Animal diseases spread not only to other animals, but also to human beings. Investing in animal health can thus also be considered a global public good.

The Expertgruppen för biståndsanalys (EBA) has commissioned Jonathan Rushton, Arvid Uggla and Ulf Magnusson to undertake this review on the importance of animal health for economic development. The authors point at the need to build proper control and surveillance systems and provide a review of the existing strategies and policies of Sweden and international donors. They conclude that Sweden has the potential to fill investment gaps in collaboration with other international and national actors, including Swedish universities and public authorities.

The World Development Report (WDR) 2008 is focused on crop productivity. It makes no reference to the fact that improved crop productivity often leads to surplus grains being consumed by livestock to add value. page 23

The most common livestock system in Low Income Countries (LICs) is family-based smallholder farming where crops and a few animals are integrated. These systems are low-input and low-output. They produce the vast majority of the food consumed in their countries and account for approximately 50 per cent of the global beef and milk production. page 26

Consumption level of animal source foods is inadequate to meet nutritional and physical development needs of millions of poor people. However, new intensive livestock systems are actually capable of solving these problems. They pose new research and policy challenges regarding the distribution and management of externalities relating to
disease, antimicrobial resistance and waste management. page 27

New technologies in order to maintain high animal health and production status have not always been available. Even though intensive systems are becoming more important, large parts of the animal source food in LICs are still produced by smallholders. page 29

Women constitute the majority of poor livestock keepers, but the current priority setting for interventions only rarely take their experiences and needs into account. Thus, there is both an efficiency issue and an equity issue justifying a gender dimension in animal health interventions. page 30

Livestock and hence healthy animals are keys to food security, directly or indirectly, especially in LICs. Subsequently, the benefits of healthier animals would have far-reaching consequences for food security in those countries. page 40

Two-thirds of our infectious diseases originate from animals, and a recent estimate states that three-quarters of emerging human infections have their origin in animals page 43

A reduction in antibiotic use can be implemented without severe long-term effects on poultry, beef or pig production – if matched by appropriate management and disease-preventive measures.page 46

There are many examples where governments provide services that favour those who are better off. page 55

Research on international animal health issues is frequent at SLU. It is often combined with PhD training of students from LICs and from Sweden. Funding has until recently come from the Sida research council (U-forsk). 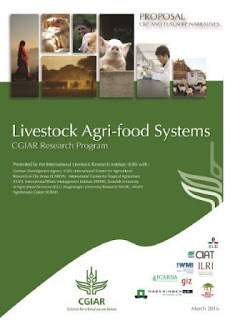 Feed is a key limiting factor and often the most expensive input in livestock production (Swanepoel et al., 2010).

Integrating feed and forage research with improved animal health and genetics can lead to significant enhancements in livestock production, up to 240% (Herrero et al., 2016). In mixed crop–livestock systems, which often have the potential to intensify, the most important contributors to feed resources are forages, crop residues and rangelands (Herrero et al., 2013), while in pastoral and agro-pastoral systems grazing of rangelands is the principal, often the only, source of feed.

Examples of specific changes that the flagship will influence through collaboration include:

This is a timely publication, especially as PAEPARD has been supporting since 2011 the Eastern African Farmers’ Federation on Extensive livestock value chains in Eastern Africa with specific focus on Kenya and Uganda and since 2015 PAEPARD is “lobbying” DG Development, DG Research and DG Agriculture to give more attention to the issue of contaminated milk due to aflatoxin in Africa.

Dairy cattle, in general, can tolerate relatively high levels of aflatoxin in their feed. It has been hypothesized that the microbial population in the rumen is able to metabolize most mycotoxins including aflatoxin. However, some of the toxic metabolites can be excreted in milk and cause public health concern and impact on trade. Aflatoxin has been the most commonly occurring mycotoxin in feed and has the most significant impact on the dairy industry. The concentration of aflatoxin (M1) in milk is highly dependent upon dietary aflatoxin (B1) and the threat to humans makes aflatoxin in dairy feeds a constant concern. In Europe maximum levels for aflatoxin M1 have been set for consumable milk at 0.05 μg/kg (= 0.05 parts per billion or ppb).