The congress is open for all contributions related to the following general topics in mycotoxin research:

Extract of the programme: 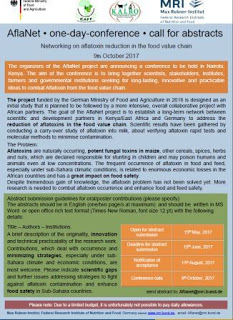 9 October 2017. Nairobi, Kenya. The AflaNet project is organising a one day conference: Networking on aflatoxin reduction in the food value chain

The aim of the conference is to bring together scientists, stakeholders, institutes, farmers and governmental institutions seeking for long-lasting, innovative and practicable ideas to combat Aflatoxin from the food value chain. The programme is based on the selection of some 58 abstract submissions (the deadline was 03/07/2017).

The project funded by the German Ministry of Food and Agriculture in 2016 is designed as an initial study that is planned to be followed by a more intensive, overall collaborative project with African partners. The goal of the AflaNet project is to establish a long-term network between scientific and development partners in Kenya/East Africa and Germany to address the reduction of aflatoxins in the food value chain. Scientific results have been gathered by conducting a carry-over study of aflatoxin into milk, about verifying aflatoxin rapid tests and molecular methods to minimise contamination.
Registration needs to be send to email: [email protected]

Following a successful 1st ASM held in 2015 in Zambia, a second symposium will be held under the auspices of the International Society on Mycotoxicology (ISM).
Related:

To support farmers in East Africa, West Africa and Latin America, the video on managing aflatoxins in groundnuts has been translated in 10 local languages, specifically in Aymara, Bambara, Bemba, Chichewa, Gourmantche, Hausa, Mooré, Peulh Fulfuldé, Quechua and Zarma languages. This will not be possible without McKnight Foundation who funded the video and its translations.

These videos are freely downloadable, also in 3gp format for mobile phone viewing. Kindly share them with as many people as possible, using the Facebook, Twitter, Whatsapp, LinkedIn and email options provided at the left side of the video screen on the website.
There is, from now on, a page on the website which shows all the latest uploads each month. You can find the page under ‘forum’, but the direct link is: Recent uploads.

Managing aflatoxins in groundnuts during drying and storage
Let us learn how to dry and store groundnuts to have clean, healthy groundnuts, free of aflatoxins.