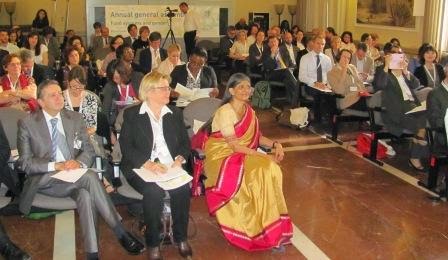 The objectives of the Annual General Assemblies of the Global Donor Platform for Rural Development (AGA) were to:

2 December 2014. As a pre-event to the Annual General Assembly in Florence, the Secretariat of the Global Donor Platform helped organise a consultation Meeting on the Topic of NEPAD’s Support Prograamme ‘Gender, Climate Change and Agriculture’ for 5 countries in Africa. More than 30 participants discussed with Estherine Fotabong, NEPAD and NORAD, IFAD, GIZ, WB, UNWomen and FAO gave detailed feedback on the programme in light of their gender policies.

Three main ideas were agreed upon during the meeting:

NEPAD in collaboration with NORAD will invite development partners to a conference in Oslo in early 2015 to increase collaboration with donor agencies, private sector and NGOs and to mobiles investments into this 5-year programme.

This Book summarizes women’s contributions to agriculture and food security and the obstacles to their broader participation. It draws on data at the micro, census and national levels. It challenges conventional story lines on women in agriculture. The Food and Agriculture Organization of the United Nations (FAO) produced a 2011 report on women in agriculture with a clear and urgent message: agriculture underperforms because half of all farmers—women—lack equal access to the resources and opportunities they need to be more productive.

The book’s six editors—including two IFPRI researchers, Agnes Quisumbing and Ruth Meinzen-Dick—build on the report’s conclusions by providing, for a nonspecialist audience, a compendium of what we know now about gender gaps in agriculture.

The authors explore linkages among gender, assets, and agricultural development projects. They examine the current state of land tenure; women’s access to markets, financial services, and rural employment; and gender differences in social capital and in vulnerability to poor nutrition and health. The book also looks at trends in agricultural research, development, and extension systems and in women’s participation in research.