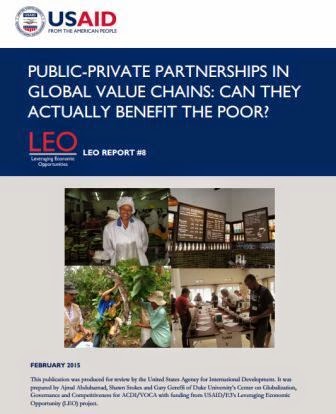 Ajmal Abdulsamad, Shawn Stokes and Gary Gereffi of Duke University’s Center on Globalization, Governance and Competitiveness for ACDI/VOCA
Funding from USAID/E3’s Leveraging Economic Opportunity (LEO) project.
February 2015. 41 pages
While private sector development is not new to the development community, the focus on development PPPs has important implications for development policy and practice. Little is known about the impact these partnerships have on smallholders in developing countries. Most studies on the impact of PPPs rely on information about the delivery of outputs, rather than an understanding of the industry context in which the PPPs take place. None of the available studies has systematically examined development PPPs against the interconnected context of local, regional and global industries, or market systems.
Thus this report does not evaluate partnerships according to the traditional format and criteria (efficiency, effectiveness, impact, relevance and sustainability). Rather, drawing on the available Global value chains (GVC) literature, as well as information and reports related to three cases in the export-oriented agricultural sectors (Cocoa in India, Coffee in Rwanda and Horticulture in Kenya out of 135 PPP cases initially reviewed), this research examines the main concerns over the potential of PPPs to truly bring about inclusive development:

The report concludes at the following:

Contextual changes characterized by the globalization of agricultural value chains not only influence patterns of production, competition, and trade; they also offer potential for public-private partnerships (PPPs) to achieve development objectives. These PPPs often result in economic growth. However, they have not always brought about significant and sustained benefits for the poor.

This panel presented research findings on USAID-supported partnerships and upgrading trajectories experienced in the cocoa sector in Indonesia, the coffee sector in Rwanda, and the horticulture sector in Kenya. This research examines what historical PPPs can teach us about how to use this approach to actually benefit the poor.