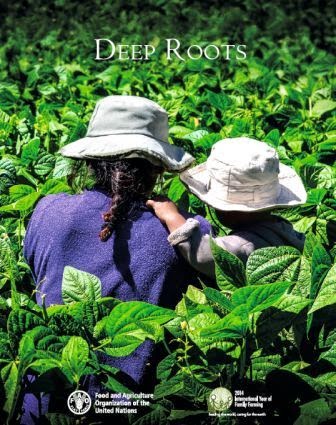 Deep Roots reflects the momentum that the IYFF has galvanized during the year. With so many experiences and insights captured in one place, this book offers an opportunity to reflect on family farming in its rich diversity while serving as a tool for how best to address their needs and demands.

Deep Roots is a new publication from U.N. Food and Agriculture Organization (FAO) that takes a closer look at the momentum generated by the International Year of Family Farming (IYFF) in 2014. According to FAO, the book examines “family farming policy development and actions at international, regional, national, municipal and local levels of activity. The commentaries draw upon experiences around the world, reflecting how Governments, civil society and other stakeholders focus on family farming to achieve social development goals and advance the well-being of societies.”Deep Roots highlights the benefits of family farming in supporting sustainable development, addressing a wide range of topics including family farming and its relationship to food security, balanced diets, and boosting local economies.

Livestock matters a great deal in developing countries, playing an increasingly important role in food security and economic development. In fact, the livestock subsector is growing faster than all other agriculture sectors in developing countries worldwide. And importantly in the International Year of Family Farming, the bulk of that livestock production is occurring on small family farms. Livestock farming offers unique features to support local livelihoods and economies, especially for women.

Some 70 per cent of the world’s 37 billion farm animals are raised in developing countries, and that share will increase in the coming decades.

A major reason for this is an ongoing dramatic rise in demand for meat, milk and eggs in developing countries, far outstripping that for grains, starches and other food crops. This ‘livestock revolution’ is a result of dietary changes due to increasing urbanization and incomes, both of which lead people to spend more of their disposable income on meat and other high-value animal-source foods than on maize, rice, potatoes and other cheaper staples. As a consequence, total demand for livestock products is expected to double by 2050 from 2000 levels. Nearly all of that growth is occurring in developing countries, where experts anticipate a 37 per cent rise in per capita consumption of animal-source foods, even as rich country consumption levels flatten or decline.

The printed edition of Deep Roots was launched on 27 November 2014 at the IYFF closing ceremony in Manila, Philippines.

“WFO attaches importance to the family farming business model, and appreciates the Food and Agriculture Organization of the United Nations (FAO) and all stakeholders who have worked hard in 2014 to promote this model of agriculture,” stated Piet Vanthemsche, World Farmers’ Organisation (WFO) Vice President during the session focused on Farmers’ Voices and Way Forward for Family Farming.

The agenda for the IYFF Closing Event is available here. View the winning pictures from the IYFF photo contest. To learn more about the closing event,read this article by FAO.

Special Ambassadors for the International Year of Family Farming Robert L. Carlson for North America and Gerd Sonnleitner for Europe were unable to attend the event, however each shared a special closing statement on the occasion of the celebration for the IYFF closure.