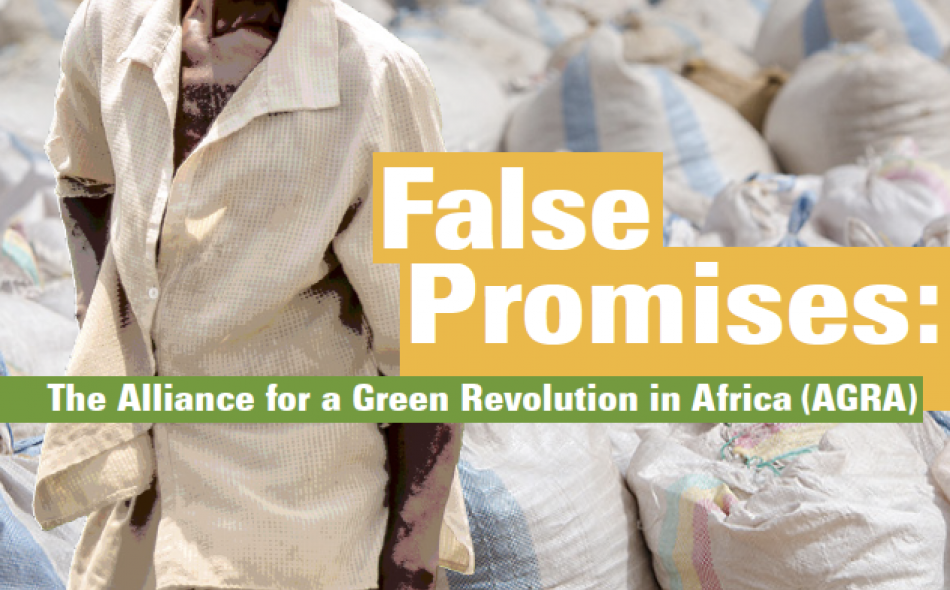 Failing Africa’s Farmers: An Impact Assessment of the Alliance for a Green Revolution in Africa.
GLOBAL DEVELOPMENT AND ENVIRONMENT INSTITUTE WORKING PAPER NO. 20-01
July 2020. 38 pages.

False Promises, a report from a coalition of international development organizations, argues that AGRA missed its 2015 goal to double the productivity and incomes of 30 million small-scale food producers by this year, saying that AGRA’s initial goals were to double incomes for 20 million farming households while halving food insecurity in 20 countries by 2020.

The report is based on a study by Tufts University researchers, who say AGRA declined requests to provide internal monitoring and outcomes evaluation data. Instead, researchers used country-level production, yield and land data to assess whether AGRA programs had significantly raised agricultural productivity.

AGRA’s 2017-2021 strategy states it will “contribute” to doubling the yields and incomes of 30 million smallholder households—nine million directly and 21 million indirectly.

In a statement to SciDev.Net, AGRA says it reached 4.7 million farmers in 2019. The alliance disputes accusations that its approach is failing Africa’s farmers.

We found no evidence that productivity, incomes or food security were increasing significantly for smallholder households. (Failing Africa’s farmers: New report shows Africa’s Green Revolution is “failing on its own terms”).

Watch a recording of a webinar hosted by HOMEF in collaboration with AFJN on August 6, 2020 on which Timothy A. Wise discusses his research and the report.