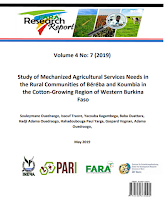 Study of Mechanized Agricultural Services Needs in theRural Communities of Béréba and Koumbia in the Cotton-Growing Region of Western Burkina Faso
Although predominantly an agricultural country (40% of GDP), Burkina Faso continues to import cereals to feed its population. Farmers in Burkina Faso still use rudimentary tools to produce in unpredictable climatic conditions. Late rains, shorter seasons, and farm labour shortage are all challenges that are difficult to overcome through draught power and manual work.

And yet, the population engaged in agriculture in Burkina Faso consists largely of smallholder producers (75%). As a result, only 25% of farmers are deemed to have the means to acquire a tractor to mechanize farming operations in order to modernize the agricultural sector and address the issues of productivity and labour shortage, as well as the need to plough at the right time to keep up with the crop calendar.

Seventy-five per cent of producers are assumed to be unable to afford a tractor to deal with the numerous challenges mentioned above. The aim of the study of the needs for mechanized agricultural services in the cotton-growing area of western Burkina Faso was to analyse the need and demand for mechanization services in order to put forward appropriate solutions that address the concerns of most agricultural producers.
The study shows that demand for tractor services was quite low (30%). The main crops of the area were maize, cotton, sorghum and millet respectively. Sixty-five per cent of total demand was met. Prices for services varied between 15,000 and 30,000, whereas willingness to pay was between 10,000 and 17,500. This translates into a sharp imbalance between supply and demand for mechanized agricultural services.
Download publication: FARA Africa 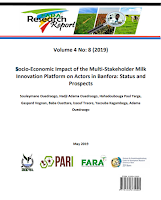 Socio-Economic Impact of the Multi-Stakeholder Milk Innovation Platform on Actors in Banfora: Status and Prospects
Since 2015, the Forum for Agricultural Research in Africa (FARA), in partnership with German Government represented by the “Centre for Development Research” (ZEF), University of Bonn, under the “One World No Hunger” initiative has undertaken to implement the “Programme of Accompanying Research for Agricultural Innovation (PARI)” in twelve African countries, including Burkina Faso.
This study complements the in-depth 2016 milk-IP case study, which contributed to the capitalization of IP knowledge and experiences across the country.
Download publication: FARA Africa 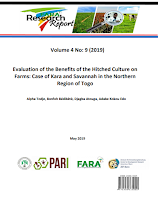 Evaluation of the Benefits of the Hitched Culture on Farms: Case of Kara and Savannah in the Northern Region of Togo
The harnessed culture introduced in Togo since the German colonial period increased with the Project of Support to Animal Traction (PROTA) and the establishment of Agricultural Equipment Production Unit (UPROMA) in the year1980. 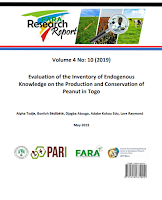 Evaluation of the Inventory of Endogenous Knowledge on the production and Conservation of Peanut in Togo
Peanut is a legume that comes into the diet of men in various forms. In the 1960’s, India, China and West Africa were the only three continents that produced the most peanuts with each continent producing about 35%, 19% and 18% of the total amount respectively, representing a total of 72% of the world production. Most peanuts are produced by small scale farmers.

There is often a deficit in peanut consumption in southern Togo. In the southern parts of the country, most crops are used for consumption as fresh peanuts. Peanut production in the Northern regions however produces more peanuts thereby reducing the deficit recorded in the southern sector (Ministry of Rural Development, 2000).