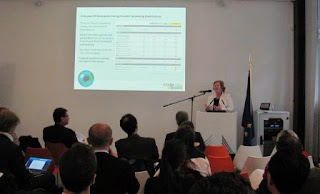 “Investment continued to spread to new markets throughout 2014, with Chile, Indonesia, Kenya, Mexico, South Africa, and Turkey each investing more than USD 1 billion in renewable energy.”

“Despite spectacular growth of renewable energy capacity in 2014, more than one billion people, or 15% of humanity, still lack access to electricity. Moreover, approximately 2.9 billion people lack access to clean forms of cooking. With installed capacity of roughly 147 GW, all of Africa has less power generation capacity than Germany”. ((see slide 21)

“When you look at investment relative to GDP, you get a completely different list of countries. The countries now are: Burundi, Kenya, Honduras, Jordan and Uruguay which clearly highlights the rapid advancement of renewable energy in developing countries.” (see slide 6)

page 57: THE WATER-ENERGY-FOOD NEXUS
Despite the challenges associated with some renewable technologies, renewables offer great potential to reduce demand pressures and enhance water, food, and energy security—if deployed sustainably.
Renewable energy can enhance food security by reducing the agri-food sector’s vulnerability to fossil fuel price spikes and volatility, which have been linked to the 2007–08 global food crisis. The use of renewables also can increase product value while reducing food losses in developing countries, where 30–40% of food produced is lost due to insufficient energy for processing and cooling. Solar dryers are being used to preserve fruit in northern Pakistan, and biogas-powered cooling has been introduced in the Ugandan dairy industry. Bioenergy, produced from organic waste and non-food crops, can raise the productivity of local farms, thus increasing disposable income.

Research and non-profit organisations already are employing nexus assessment tools—for example to evaluate potential nexus trade-offs pertaining to Ethiopia’s Growth and Transformation Plan and to assess alternative agricultural patterns and the potential for biofuel production in Madagascar. Some groups, such as the German Development Agency, GIZ, and the Economic Community of West African States (ECOWAS), are working to integrate the nexus approach and tools on a broader
policy level.
Additionally, the water-energy-food nexus has been identified as a High Impact Opportunity by the Sustainable Energy for All (SE4ALL) initiative. Despite the progress made and the increasing availability of assessment tools to facilitate the integration of this approach, however, governments, industry, academia, and civil society still have a long way to go to fully integrate nexus thinking into policymaking and project development.
page 83: INVESTMENT BY TYPE
Global research and development i (R&D) increased by a modest 2% in 2014 to USD 11.7 billion, with government R&D steady at USD 5.1 billion, and corporate R&D at USD 6.6 billion. Europe remains the biggest investor in renewable energy R&D by far, spending 36% of the total (USD 4.3 billion)—almost equal to the combined outlay of the United States and China.
Networks furthering energy access in Africa: (see page 176 of the report)

Africa is the continent of opportunities. African societies and economies are accelerating their rise and integration into the world economy. Building on a strong agricultural base and on vast natural resources, industrialisation and the service sector – e.g. through innovations such as mobile banking – are generating jobs and welfare for the African people.
Related:

Support for energy in developing countries and the sustainable energy for all challenge. Contribution from the European Commission 2005-2011.

EU support to energy – a wide range of programmes and instruments committed to the goal of Sustainable Energy for All . The EC has spent more than EUR 2 billion over six years on improving the state of the energy sector in developing countries through its Official Development Assistance, including efforts to increase access to modern energy services.
This document (2012, 11 pages) tries to describe how this funding was used and the impact it had. They are based on a first analysis of a database of more than 700 projects and programmes in the energy sector funded by the EC together with its partners.

The company is planning a plant in Ghana replicating the original model in Kenya, near Lake Volta, where VegPro has a 1,000 hectare farm, McMillan said.

In October 2015, South Africa will become the sixth country, and the first in Africa, to host the International Renewable Energy Conference (IREC). Convened by REN21, IREC is a high-level political conference series hosted by a national government. SAIREC 2015 builds on the success and outcomes of the previous events: Bonn, Germany (2004), Beijing, China (2005), Washington, USA (2008), Delhi, India (2010), Abu Dhabi, UAE (2013).

SAIREC 2015 is composed of parallel sessions, side events, a trade show and site visits. The full programme can be access here.

Renewables supporting climate adaptation is a new concept. It does not replace the ‘older’ concept but adds a fundamentally relevant new component. The generation of clean energy can increase the resilience of local groups or entire regional populations while responding to (adapting to) social or economic shocks brought about by climate change and extreme weather events. Decentralised mini-grid clusters could use locally available renewable energy sources and help to speed-up electrification. The step-by-step interconnection of smart grid clusters towards a regional and national power system can accelerate the process of electrification and form a more resilient energy supply system which can deliver industrial scale power supply for economic development as well.

Dr. Muok has worked for over 20 years in research focusing on renewable energy, energy access and policy in Africa, science technology innovation, environmental conservation forestry and climate change adaptation and mitigation. He is the Director of Programmes at African Centre for Technology Studies and Vice President World Bioenergy Association. He is board member of World Intellectual Property Organization and member of East African Community Bioenergy Advisory Group.

African countries and regional bodies—in collaboration with international organisations and partners—have developed a regional approach in the power sector. This will enable the creation of regional power markets through the integration of existing infrastructure and development of regional projects with high transformation potential.In this regard, the African Union Commission, in partnership with the United Nations Economic Commission for Africa, African Development Bank and the NEPAD Planning and Coordinating Agency formulated the Programme for Infrastructure Development in Africa (PIDA). Furthermore; IRENA is assisting the regionin the transition to a greater share of renewable energy in the energy supply mix. In this context the Africa Clean Energy Corridor (ACEC) is a regional initiative calling for accelerated development of renewable energy potential and cross-border trade of renewable power within the Eastern Africa Power Pool (EAPP) and Southern African Power Pool (SAPP).

In Sub-Saharan Africa, the optimization of traditional biomass and the uptake of modern biomass are occurring at a rapid pace across the region for a wide variety of uses. Industrial energy users who rely on consistent and affordable power and heat to remain competitive are upgrading their systems to provide more autonomy, reduce reliance on the national grid and in many cases tackle their waste streams at the same time.