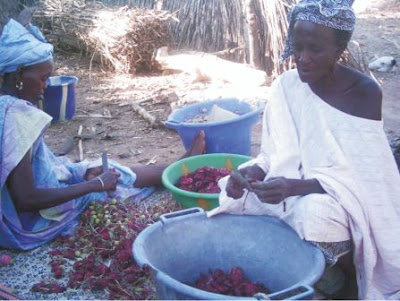 With – among others – a support program of the Senegalese state – Le Fonds National de Recherches Agricoles et Agroalimentaires du Sénégal (FNRAA), to increase the cultivated areas and the number of actors, H. sabdariffa (bisap) occupies an important place in the marketing of agricultural products in Senegal.

The export of dried calyx of H. sabdariffa to Europe and the United States at prices between (1,000 and 2,500) $US·t–1 is increasing year by year.

Hereunder is a video with Dr Ababacar Sadikh NDOYE, Directeur général Institut de Technologie Alimentaire – ITA, about the export of bisap in powder and packaged in 25 grams bags. The producers are represented by women groups, an NGO has given training on how to improve production and conservation techniques, the researchers come from the Institut de Technologie Alimentaire, and a private compagny Valdafrique and Sodobio have taken up the purchase of an industrial atonomiseur (to produce hibiscus in powder form).

He was inteviewed by PAEPARD during the second CAAST-Net Stakeholders’ Conference on Africa-Europe S&T Cooperation, Dakar, 24-25/04/2012.

Transcript:
Bisap has become a national commodity in traditional festivities and ceremonies. The Senegalese authorities have recoginzed the importance of the bisap value chain in its policy of agricultural diversification. When did the multi stakeholderexperience started? It started in the nineties with research leading to a bisap concentrate. A local company realised it could make a beverage in tetrepack out of it. We developed a partnerhship in 2001 with the company which now sells the tetrapack in the warehouses. We also had a partnership with the University of Gembloux, the University of Dakar and my institute ITA. We developed drying technologies in 1996 and in particular the Diaspora found it bulky to transport bisap leaves. We started thus to research bisap in powder form. We have managed to develop a formula for a stable atomisation and  keeping its red color. We adopted this for other commodities and wanted to improve it. The evaluator of the Walloon (Belgian) funding recommended to create a pool of the 3 institutes involved in drying. The company “Developpement des biosense” was thus created in 2007 under the leadership of ITA. The private cie Oasis got interested and while our market was increasing we managed to sell to Japan, got the interest from Nestle and Sodobio. We could not remain at a pilot stadium when the entreprise ValAfrique asked for “atomisation”tests around acacia gum. In due course they have purchased an high quantity atomisation equipment. We concluded a partnership with them to extend the use of this equipment to other products like bisap. What we initially sold to Japan can no more be compared to the present product of Valafrique. Looking backwards there was no difference between a sack of seeds and our powder beverage!

The challenge to collaborate with the private sector:

Transcript:
The advantage was that with Valdafrique we have colleagues who understand research very well because some are scientists themselves, like pharmacists. They understood that in innovation you have to invest today to harvest in 2 or 3 year time. We also had an easy dialogue: they understood well the pathway of research. In our mutual agreement they support us and we will not stop with bisap. In the pipeline are vinegar of mint, also destined for export.

The collaboration with the producers (farmer organisations):

Transcript:
Our concern towards the producers is traceability. We try to explain to our producers that the agro industry has a number of requirements. The source of purchase has to be reliable. Valdafrique has ontracted for example a number of women groups to produce acacia gum. We have a close collaboration with an ngo which is so far the only one which exported bio bisap.

The collaboration with the European partner:

Transcript:
The role of the European partner (Prof Philippe Thonart of Gembloux) was essential. He has opened our eyes towards innovation. I’m full admiration when I go to the scientific parc of Liege and see all the accumulated scientific results and how he was able to translate them into products by creating spin-offs. And this has convinced me with my team that we could also reach our goals. His authority has also increased our bargaining power. The Belgian partner was mainly interested in bisap as color dye? Initially yes, but later on came also fermentation research issues.

Introduced in the XIXth century, Bissap (Hibiscus sabdariffa) is grown throughout the territory of Senegal, particularly in the Kaolack, Djourbel, Thies, Saint-Louis and Louga regions. In these areas, cultivated surfaces vary between (0.25 and 5) ha and are managed for the most part by women who are grouping together more and more in associations or economic interest groups. It is grown in the winter period in a cycle of (120 to 165) days, depending on traditional practises, and usually without fertilizer.

The harvest and post-harvest treatments are carried out manually, while drying is carried out in the sun and often directly on the floor. The main processing activities of the H. sabdariffa calyx are crushing, and the production of drink and concentrate, jam and instant powder. The manufacture of beverages, the main method of transformation, carried out under the direction of women’s groups, has remained virtually artisanal. Markets.