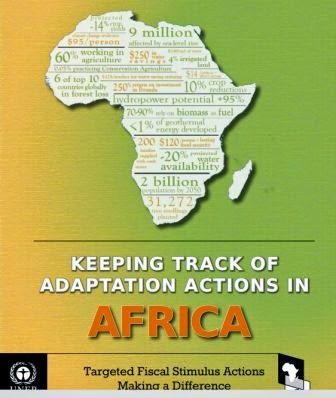 12 August 2014. Nairobi. Launch of the UNEP report Keeping Track of Adaptation Actions in Africa. The report findings details that -Investment in climate change adaptation can help ensure that the impacts of climate change – including a projected 20-50 per cent decline in water availability – do not reverse decades of development progress in Africa, according to a new report released today by the United Nations Environment Programme (UNEP).

Keeping Track of Adaptation Actions in Africa (KTAA) – Targeted Fiscal Stimulus Actions Making a Difference – is the first graphical report that presents practical examples of successful low-cost adaptation solutions from around sub-Saharan Africa in one concise handbook. The report includes examples of successful adaptation projects that have provided the impetus for large-scale government investments and policy action.

“With 94 per cent of agriculture dependent on rainfall, the future impacts of climate

change – including increased droughts, flooding, and seal-level rise – may reduce crop yields in some parts of Africa by 15 – 20 per cent. Such a scenario, if unaddressed, could have grave implications for Africa’s most vulnerable states. Using projects implemented in various countries in sub-Saharan Africa, the KTAA report clearly demonstrates how investment in adaptation actions can provide, not just low-cost solutions to climate change challenges, but can actually stimulate local economies through more efficient use of natural capital, job creation and increased household incomes.” UN Under-Secretary-General and UNEP Executive Director Achim Steiner.

The practical publication responds to the 2013 Africa Adaptation Gap Report which was endorsed by the African Ministerial Conference on the Environment (AMCEN), and which identified the potentially crippling costs of climate change for Africa.

“Incipient threats posed by climate change, particularly in terms of potentially overturning decades of development efforts in Africa, suggest that future development efforts should incorporate greater resilience to climate change impacts. The KTAA report is an action guide that showcases ways to do this in various sectors and African countries should use this as the guiding document for investments in adaptation to climate change.” President of AMCEN and Minister of State for the Environment, United Republic of Tanzania, Hon. Dr. Binilith Mahenge.

The first part of the report provides snapshots of the current and predicted future impacts of climate change on livelihoods, agriculture, and human and ecosystem health in Africa, detailing impacts by region, country and even city.

The second half of the report describes how countries through low-cost climate adaptation actions can: