Hereunder follows an interview with Dr. Byarugaba Bazirake, director of Afribanana Products Ltd. He was interviewed by PAEPARD during the EAC-Europe Food Security Thematic Policy Dialogue organised by CAAST-net.

Bananas(matooke) constitute a very important staple crop in Uganda, and are being grown by 75% of the country’s farmers on 40% of the total arable land.

The triploid, Musa acuminata East African highland cultivar (AAA-EA genotype) locally known as matooke predominates banana production in Uganda and provides major food for over 7 million people including two thirds of the urban population. Bananas are so important in Uganda so much so that in some parts of the country the word “matooke” means both “banana” and “food” and the crop contributes about 35% of total food consumption expenditure.

The demand and supply of matooke in urban areas has come with associated problems of: 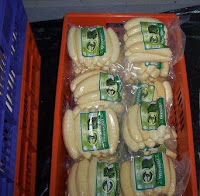 Matooke Bulk Marketing problems: They include:

The technological approach objectives were to:
Materials

Further Background:
Dr. Byarugaba Bazirake is a lecturer of food technology and biotechnology at Kyambogo University and works with Prof. Wilson Byarugaba of Kampala International University Western Campus.  The project was given part of Uganda Investment Authoritys land in Mbarara Industrial Park and has been able to put up a factory which opened on March 15 this year. The site was selected because of its proximity to the matooke-producing areas of western Uganda. Twenty-five people are currently employed in the factory.

Vacuum-sealed cooking banana ready for sale or export
© George Bazirake
Cooking banana, known in Uganda as matooke, has a relatively short shelf life – too short for fresh bananas to be easily exported and sold in Europe. But in a new initiative, a Ugandan company has begun to export peeled, vacuum-packed matooke, which can last for up to a month. This is an exciting way of adding value to a crop which occupies nearly 40 per cent of Uganda’s arable land. Wambi Michael talks to banana experts, an exporter and a consumer about the new innovation.
Interview by:
Wambi Michael
Country:
Uganda
Duration:
4’26”
Date published:
January 2010

Climate change could lead to bananas becoming a critical source of food for millions of people, a new study has claimed.

The study, Impacts of climate change on the agricultural and aquatic systems and natural resources within the CGIAR’s mandate, should help decision-makers at all levels prepare better for future food production on our warming planet.

Read the policy brief by CCAFS that outlines the challenges required in feeding the estimated 9–10 billion people who will live in this world by 2050. In the brief, the need for a complete recalibration of what crops we grow and animals we raise around the world is detailed, as climate change will bring challenges in weather, water use, and increased pests and diseases of crops and animals alike.

Researchers from the CGIAR agricultural partnership said that the fruit might replace potatoes in some developing countries, the BBC reported. The authors of the report also said that cassava and the little known cowpea plant could play increasingly important roles in agriculture, as temperatures rise and people will have to adapt to new and varied menus as traditional crops struggle.

Responding to a request from the United Nations’ committee on world food security, a team of experts in the field looked at the projected effects of climate change on 22 of the world’s most important agricultural commodities. They predict that the production of world’s three biggest crops in terms of calories provided – maize, rice and wheat – will decrease in many developing countries.