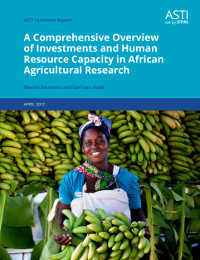 April 2017, 56 pages
Countries in Africa south of the Sahara (SSA) have made progress increasing their investments to agriculture, honoring regionwide commitments such as CAADP. However, new data and analysis by Agricultural Science and Technology Indicators (ASTI) shows that growth in agricultural research investments has lagged considerably behind spending on other agricultural areas, such as farm support, subsidies, and irrigation.

These findings—along with datasets, analysis, country factsheets, and online tools for country comparison, graphing, and benchmarking—have been just released online and summarized in a newly released ASTI Synthesis Report,

The data cover key indicators on agricultural research investments, human resource capacity, and research outputs in the region. Other highlights include:

The report concludes by outlining a number of policy measures that SSA governments can undertake to address the various challenges related to agricultural research funding, human capacity, outputs, infrastructure, and institutional structure.