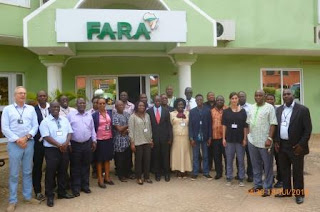 11-15 July 2016. The African Union Commission launched in May 2016 Phase 2 of the African Union Research Grants programme with an open call for proposals for Research and Innovation in Africa supported by the European Union. The closing date for applications is 17 August 2016. All information and documents pertaining to the call are available on the AURG website.

PAEPARD management is organizing 2 regional write-shops to allow those who would like respond to the AUC Research Grants open call. The two write-shops are facilitated by Mr Gerard den Ouden who facilitated the 2012 African Union call.
Background:

Also in 2012 – taking advantage of the African Union Research Grants open call for proposal – PAEPARD organized 2 write-shops for consortia who had completed the partnership inception workshop. Besides the consortia initiated by PAEPARD.

The average cost per workshop was 40,000 Euro per workshop. 11 proposals focused on the AU Call (deadline 20 April 2012). The facilitator was: Gerard den Ouden (the Netherlands/Belgium). In 2012 none of the proposals was selected.

Evaluation African Union Research Grants 2011-2012
The focus was on socio-economic issues in the sectors of food security, sustainable energy and integrated water resources and waste management. Under the African Union Research Grant calls, there was a problem of high wastage and unmet demand with only 20 grants being made (with a further 11 reserves) against the 450 bids received (i.e., a success rate of about 5%). Funding available for the African Union Research Grants was very limited. As a consequence, the success rate for applying was low, and many potentially interesting projects did not receive funding. The available funding was thus not adequate to meet the strong demand for Africa-focused research grants.

Selected proposals: The two ARG calls (2001+2012) resulted in 20 grants up of to 750,000 (total value: EUR 13.8 million). The contracts all end between December 2015 and December 2016. Of the 20 projects funded, five were led by European and 15 by African organisations, (in contrast with FP7 consortia which are usually European led) although activities always take place in Africa. This funding was seen as a good preparation to be successful in FP7 calls, although it is too early to say whether AURGs will contribute to more success under H2020. The EU is pushing the AUC strongly to find other funding sources, including AU Member States, but this continues to be a struggle.