Training workshop Processes and Practices in multi-stakeholder partnerships in ARD:

This side-event was part of Work Package Capacities Work Plan for Year 7 under the PAEPARD implementation Plan. The overall aim of the side-event was to enable the members of ULP and consortia funded under CRF and ARF better manage projects and document the change process. The meeting offered the opportunity for ULPs, CRF and ARF project teams to engage and network with other actors engaged in ARD and link to other academia in Africa. Agenda:

Workshop on monitoring and evaluation

The structured monitoring of the implementation of PAEPARD-CRF activities started in FY2015.

The first M&E visit to all the projects was at the beginning of 2015, when the FARA M and E Specialist assisted the teams revise their Results Frameworks (RFs) and establish the baseline values and indicator targets for ease tracking implementation progress. Assessment is made from quarterly technical and financial reports and the once-in-a-year Monitoring visit.

All the 4 projects have generated (or are likely to generate) impressive outputs. The projects working

with a diverse array of value chain actors have generated high expectations that may neither be satisfied in the current phase, nor achieve a scale that can achieve meaningful impact within the 3-year implementation period within which to generate research technologies and scale them out to end users. Nonetheless,

Workshop on the improvement of the use of the Open Source OSIRIS: all deliverables and consortia agendas have an electronic format and the PAEPARD supported consortia are able to promote their activities on the Web and publish documents or information related to their results.

One of the means of building the capacity under PAEPARD is the write-shop to develop proposals responding to calls launched by donors. Around 9 write-shops were organized by PAEPARD since 2011. The documentation (process, proposals developed, awarded proposed) of these write-shops has started in order to share with partners lessons learnt. However, there was need of a feedback from those who participated in the write-shops and partners who did not attend. 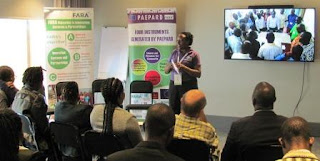 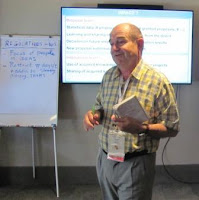 A lot of energy is put into the writing and submission of proposals. However, only a few proposals are finally selected for funding. But particularly, for the proposals submitted under the Applied Research Fund (ARF) of the Dutch
WOTRO (science division of the Netherlands Organizations of Scientific Research), the time and money invested in consolidating a consortium and improving on the concept note and proposal writing has paid off. Although in terms of numbers: from the 13 proposals submitted to this Dutch funding opportunity, only four were selected (with nine not selected). However, the number of selected ARD projects submitted by PAEPARD supported consortia is not too bad compared to the success rate one would find in some specific calls for proposals.

Linking African agricultural universities to research-users through the multistakeholder partnerships

During the two calls launched by PAEPARD in 2010 and 2011 many African universities joined other
actors to form the MSP around different value chains. Out of 150 concept notes received from the two calls, 21 were led and submitted by universities from which 6 were selected out of a total of 19 that got PAEPARD support.

See further: Mugabe, J.M., Nampala, P. Linking African agricultural universities to research-users through the multistakeholder partnerships: Experience from PAEPARD. RUFORUM Working Document Series (ISSN 1607-9345) No. 14 (1): 421-428.
This side event also had a presentation from: Agrienterprise development as pathway to youth and rural development in sub-Saharan Africa: The case of agrienterprise business prototypes at Egerton University