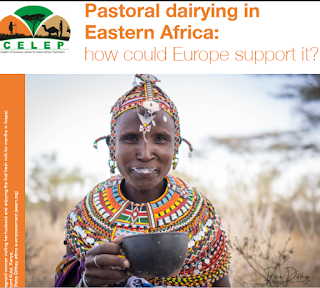 Most pastoral development interventions focus on meat production. Greater emphasis on dairying could improve human nutrition in the drylands and strengthen pastoralist women’s role as traditional managers of milk and innovators in dairy marketing.
The CELEP brief “Pastoral dairying in Eastern Africa: how could Europe support it?” (2018, 6pp) reviews documents about dairy development in the region. It looks into the diﬀerences between formal and informal milk markets, including evidence concerning food safety. It draws attention to the speciﬁcities of pastoral dairying, which call for a diﬀerent development approach in the drylands than in the highlands. T

Most dairy “development” projects to collect, process, package and distribute milk deal with men, and rob women of their power within the pastoralist society and economy. More research into how the existing dairy value chains in the drylands benefit pastoralists and consumers would provide a better evidence base for this recognition and help identify entry points for collaboration. (page 5)

Pressure to meet the Western standards and to ban informal milk marketing comes mainly from large-scale corporate dairy firms in the formal sector. These interests can work against more effective and inclusive policies for dairy development13. Strengthening pastoralist CSOs and milk trader associations can help to bring their perspectives into the policy arena and to counter these vested interests. (page 6)

Instead of trying to enforce unattainable standards that would push smallholders, pastoralists and actors out of business or even into illegality, it is necessary to develop standards that reflect the situation and needs of small-scale producers and the mass of consumers.  (page 6)

Protective dairy policy in Europe has favoured dairy exports to Africa. Milk powder repackaging and reconstitution facilities are central to the African investment plans of numerous European dairy firms. Imports of milk powder can help fill the gap in domestic milk supply but undermine the value chains based on locally produced milk and the efforts to develop these value chains. (page 6)

The EU should facilitate discussion about responsible patterns of EU trade and investment in the dairy sector in Africa to support development of dairy value chains from milk produced locally by smallholders and pastoralists, rather than from re-constituted imported milk powder. (page 6)

In late March 2018, CELEP – in collaboration with Oxfam – organised a learning tour on small-scale dairying in Kenya for a delegation from three West African countries: Burkina Faso, Mali and Niger. 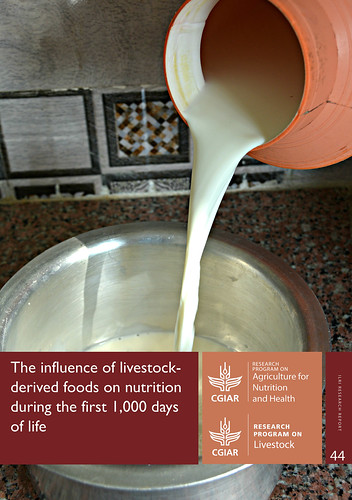 Download the full report:
1 June 2018. For decades, scientists and nutritionists have proclaimed the nutritional and health benefits of consuming modest amounts of meat, milk and eggs – livestock-derived foods (LDF) – especially to children and their mothers in poor countries.

To test these assertions, the International Livestock Research Institute (ILRI) and the Chatham House Centre on Global Health Security recently reviewed evidence from low- and middle-income countries on the nutritional effects of livestock-derived foods on infants and their mothers during the crucial first 1,000 days between conception and 2 years of age. The study also looked at the health and environmental externalities associated with global LDF production and consumption.