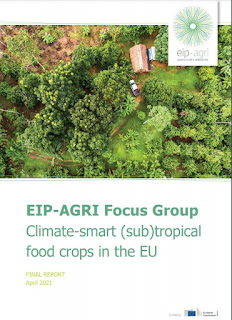 The Focus Group was launched by the European Commission, DG AGRI in 2020 as part of the activities carried out under the European Innovation Partnership for Agricultural Productivity and Sustainability (EIP-AGRI). It brought together 20 experts from across the EU to share knowledge and practices around the main question. Experts were selected to combine different backgrounds (farmers, advisers, researchers and industry representatives).
This report discusses the main conclusions of the Focus Group, and identifies future actions to improve climate-smart (sub)tropical crops.
The Focus Group has identified a large number of climate-smart practices for (sub)tropical crops, both in ORs and continental Europe. Case studies were highlighted at different levels from the parcel up to the value chain and regional levels. Relevant options already exist for low-input cropping systems, including traditional systems in ORs that enhance diversity (multistrata systems, agroforestry, crop-livestock integration,…).
Still, a lack of value chains to recognise the agro-ecological nature of these systems was underlined. The Focus Group insisted on the need to develop knowledge exchange between ORs and continental Europe, to share the existing good practices and support the development of new ones. The Focus Group has identified future actions to improve climate-smart (sub)tropical crops, either as innovative projects such as Operational Groups or as research needs from practice

Recent reviews have highlighted three relevant levers for climate-smart agricultural practices in tropical areas: i) limiting N2O, CH4 and CO2 emissions, ii) storing more carbon in soils, and iii) developing green energy production, through methanisation or agrifuels. Such climate-smart solutions for (sub)tropical crops already exist both in the EU’s ORs and in continental EU. All these agro-ecological options are leading to a satisfying compromise between food production, and adaptation and mitigation to climate change, thanks to new biological regulations that have emerged in such low-chemical input and diversified cropping systems.

The practices considered should not be seen as individual or isolated practices, but as part of a system design approach that considers all diversification options that could be relevant at different levels. Five main levels of analysis are considered: