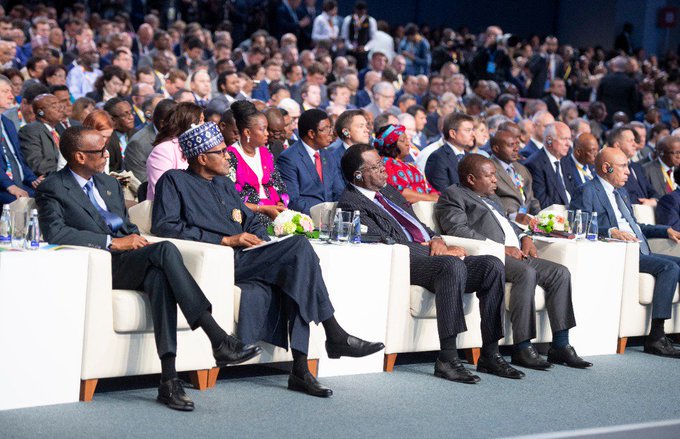 23 – 24 October 2019. Sochi, Russia.The first Russia-Africa Summit and Economic Forum, co-chaired by Russia and Egypt.
Russian President Vladimir Putin and his Egyptian counterpart Abdel Fattah el-Sisi addressed the plenary session of the forum and held a working breakfast with heads of Africa’s leading regional organisations.
The two-day forum is expected to be attended by more than 3,000 representatives of African businesses. Trade, economic and investment agreements are expected to be signed between Africa and Russia. The two-day Russia-Africa summit brings together over 3,000 guests, including 44 presidents and prime ministers of African nations – among others: 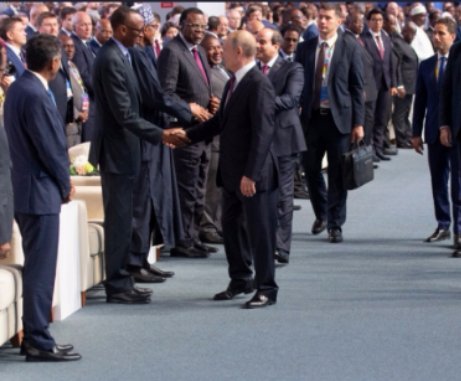 The report (Russian only) prepared by the Roscongress Foundation in collaboration with the International Trade and Integration Research Center (ITI) specially for the first Russia—Africa Economic Forum gives an overview of Africa’s role in global economy and of the trade relations between Russia and Africa. Extract of the programme:

Plenary session Russia and Africa: Uncovering the Potential for Cooperation

Russian President Vladimir Putin vowed to double Russia’s trade with Africa in the next five years, speaking at the opening ceremony of the Russia-Africa summit. Putin said Russia was currently one of the ten largest food suppliers to Africa, noting that the volume of agricultural trade was already at a higher level than export of arms.

“Export of weapons stands at $15 billion, and agricultural products have already reached that mark, in my opinion, of $25 billion. Russian companies have long and successfully worked with partners from various sectors of the African economy and were determined to increase the trade. “

Egyptian President Abdel-Fattah el-Sisi, who co-chairs the summit with Putin, on his part invited “all private companies in Russia and other countries, as well as international financial organisations to cooperate and invest in Africa.” “Now is the right time for this,” Sisi concluded.

See the video coverage (in Russian only)

The steady development of African countries in the last few years, together with growing populations and income levels are all factors helping to boost agricultural production. However, a deficit of modern technology, lack of land suitable for farming, and a shortage of qualified personnel mean that the needs of the African market have not been fully met.

Russia’s unique geographic conditions, together with its vast land and water resources, provide the country with enormous agricultural potential. In the past few years, Russian companies have taken active steps to increase exports of agricultural products and food.
Indeed, Russia is already one of the ten largest food suppliers to Africa. However, a range of barriers related to infrastructure is currently hindering effective trade. Removing these could help collaboration reach an entirely new level.

Russia and Africa: Science, Education, and Innovation for Economic Development

The accelerated development of both Russia’s and Africa’s economic potential is inextricably linked to scientific output and the improvement of general education and professional training. The 21st century has heralded the rise of the knowledge economy. Scientific research and development results in new products and industries, and is able to make a vital contribution to tackling current social and economic challenges facing our countries. The Soviet Union made an invaluable contribution to developing the scientific and educational potential of a number of African countries.