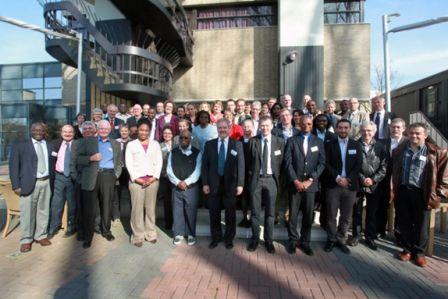 26 – 28 March 2012. Wageningen. The World Bank and Wageningen University and Research Centre organized a workshop on ‘Support to Tertiary Agricultural Education in Africa’. The Workshop, which was held in Wageningen, the Netherlands, follows on earlier discussions on higher education in agriculture at the Kampala Ministerial Conference (November 2010), the first TAE-Partnership workshop launching it in Ås, Norway (September 2011), and at subsequent meetings in Ouagadougou (November 2011) and Washington DC (December 2011).

Given the level of renewed interest in African TAE, several development partners and knowledge institutions in Africa, Europe and Northern America have initiated this series of discussions to explore how they might scale up and coordinate their support for TAE initiatives in Africa. The Wageningen workshop was intended to further strengthen this TAE-Partnership and to be the next step in that effort.

The workshop participants discussed new mechanisms to support TAE in Africa by assessing lessons learned from past and current support programs, and by matching possible new initiatives with Africa’s own plans for TAE, as expressed in Pillar 4 of the Comprehensive Africa Agricultural Development Programme of NEPAD, and by the World Bank supported TEAM Africa initiative. The latter comprises of a new coordination unit, hosted by the Regional Universities Forum for Capacity Development in Agriculture (RUFORUM) and the African Network for Agriculture, Agroforestry and Natural Resources Education (ANAFE). Specifically the Wageningen Workshop aimed to align the various North American and European donor support mechanisms as well as (bilateral) university partnership programmes and how best to support them.