After 15 years as a Television Producer and Cameraman for CBS News, RAI and ZDF John began to study ecology. In the mid-1990’s he began a participatory process with a number of media and broadcasting colleagues in Beijing.  In 2013 he received the Communications Award from the Society for Ecological Restoration (SER), “Green Gold” a film about his work produced by the VPRO won a Prix Italia award. “Hope in a Changing Climate” was named the best ecosystem film by the International Wildlife Film Festival and won several other honors.

“Ecological restoration is based on biodiversity, biomass and accumulated organic matter”

Related: Documentary of 2009: Hope in a Changing Climate. Begin of 2020 a follow up documentary will be broadcasted by the BBC – 10 years later 2019 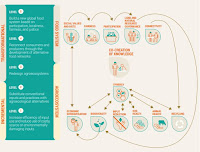 Related: Sinclair, F., Wezel, A., Mbow, C., Chomba, S., Robiglio, V., and Harrison, R. 2019.  The contrıbutıon of agroecologıcal approaches to realızıng clımate resılıent agrıculture. 2019 Global Commission on Adaptation.Rotterdam and Washington, DC. 46 pages
This paper is part of a series of background papers commissioned by the Global Commission on Adaptation to inform its 2019 flagship report. This paper reflects the views of the authors, and not necessarily those of the Global Commission on Adaptation.
This background paper focuses on the role that agroecological approaches can play in making food systems more agile in adapting to climate change as planetary boundaries are reached and exceeded, with a focus on the field and the farm scales, but recognizing key interactions with the landscape and food system scales. It highlights how agroecological practices on farms can enable adaptation, and what is required to scale these up to levels capable of reconciling the UN Sustainable Development Goal 2 (SDG 2), to end hunger, with SDG 15, to do so while enhancing rather than further depleting natural capital.
Environmental and societal drivers have led to an increasing moralization of debates around food. On the one hand, this creates an imperative for policy makers to act and, on the other hand, makes it more difficult for policy to be based on evidence, as opposed to evaluation of competing convictions. Agroecological principles that underpin food system transitions include both normative elements (e.g., they should be equitable) and causative elements (e.g., more diverse farming systems are more resilient). It is necessary to clarify, on the one hand, the normative assertions that should underpin the transition to more resilient farming and, on the other, the causative mechanisms that can bring it about. This background paper explores these issues, highlighting scalable practices that enhance adaptive capacity of farms and the methods required for their successful scaling.

Related:
Finance to adapt: Making climate funding work for agriculture at the local level, ECDPM, September 2019The Green Climate Fund stands at a crucial point with the beginning of its second resource mobilisation: it must evaluate its progress in delivering adaptation and mitigation finance, and it should increase funding for agriculture.