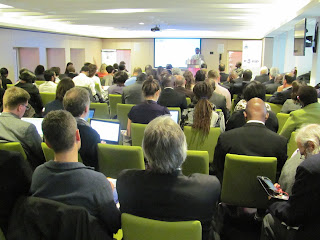 7-8 March, 2013 – Brussels, Belgium. High-level conference on ‘Promoting Africa-EU Research Infrastructure Partnerships’. Organised by Sigma Orionis (France) with the support of DST (South Africa), ISC (Belgium) and all project partners, this conference was a side event to the “EU Science: Global Challenges, Global Collaboration” conference, taking place in Brussels on March 4-8, 2013.

Mark Radka, head of the energy branch of UNEP, told SciDev.Net that intellectual property issues were “a persistent source of friction” in climate change negotiations because of fears that excessive control over clean technologies was being wielded by patent holders.

“There is a lack of analysis and data, and this is a real barrier to agreement in the technology area,” Radka said. “The lack of progress on intellectual property issues has contributed to the general sclerosis in the negotiations, and the inability of governments to come to an agreement”.

Radka said that this demonstrated the need for a better understanding of the role of patents in promoting clean technologies. The new EPO/UNEP report is intended to contribute to that end.
The full report is available at here.

The conference took place at a crucial time for the development of new cooperation instruments for Africa-EU cooperation including for collaboration in science, technology and innovation. These instruments include the new EU Horizon 2020 Framework Programme for Research and Innovation, the EU Development Cooperation Instrument and the European Development Fund.

Like all of the other commission’s programmes, the budget for Horizon 2020 is less than had been hoped. Originally the commission had asked for €80 billion ($104 billion); last month’s decision – made under pressure from the United Kingdom and others to keep down costs, and still needing approval by the European Parliament – only approved just over €70 billion.

But that is still a substantial amount of money. And a significant amount will be spent on research projects outside Europe, based on the idea that not only can European science benefit directly from working with non-European collaborators, but also that joint research can promote other objectives – including providing assistance to developing countries.

Now that the green light has been given, science policymakers, scientists and industry representatives from 100 different countries, including many from the developing world, met in Brussels this week to hear about the new funding opportunities under Horizon 2020, and to prepare their bids for a slice of the action.

But ES:GC2 was not just a talking shop. There were training sessions on topics from preparing project proposals for Horizon 2020 funding proposals, to the use patent data. And there were many opportunities for those attending to network with potential partners.
See also SciDev.Net’s coverage of EU Science: Global Challenges & Global Collaboration which took place 4-8 March 2013, in Brussels, Belgium. To read further news and analysis please visit their website.