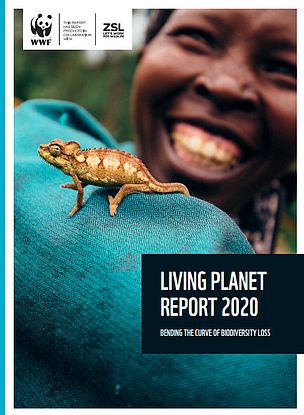 The Living Planet Report, published by WWF every two years, documents trends in biodiversity and the health of our planet. The report provides scientific evidence to what nature has been telling us repeatedly: unsustainable human activity is pushing the planet’s natural systems to the edge and the life-giving resources that humans rely on are at stake.

Global populations of mammals, birds, amphibians, reptiles and fish have suffered an average 68 per cent decline in less than half a century, according to WWF’s Living Planet Report 2020, released 10/09.

This is due in large part to the very same environmental destruction which is contributing to the emergence of zoonotic diseases such as Covid-19.

The Living Planet Report 2020 presents a comprehensive overview of the state of our natural world through the Living Planet Index (LPI), which tracks trends in global wildlife abundance, and contributions from more than 125 experts from around the world. The LPI, provided by the Zoological Society of London (ZSL), shows that factors believed to increase the planet’s vulnerability to pandemics – including land-use change and the use and trade of wildlife – were also some of the drivers behind the 68 percent average decline in global vertebrate species populations between 1970 and 2016.

“The recently proposed EU Biodiversity and Farm to Fork strategies are potential game changers and must now be unequivocally endorsed and implemented by Member States and Parliament. But that is not enough. We must also curb the EU’s global footprint, which is driving the destruction of forests, grasslands and other precious ecosystems outside of Europe. A strong new law to keep products linked to deforestation out of the EU market is urgently needed!”
The Commission’s proposals for the EU biodiversity and farm to fork strategies included essential and long overdue targets on protected areas, restoration of nature, organic farming and the reduction of agricultural chemicals. WWF especially welcomed the commitment to present legally binding EU nature restoration targets in 2021. WWF is advocating for 15% of the EU’s land and 15% of sea to be restored towards resilient ecosystems, benefiting both biodiversity and climate change mitigation and adaptation.”

Watch this video to hear Chief Scientist Dr. Rebecca Shaw‘s’ perspective on the report’s findings and its implications for human health. Shaw is joined by Actor and Activist Daniel Dae Kim for a candid conversation about this year’s report.