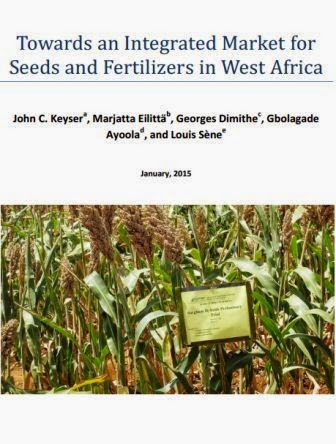 10 February 2014. Washington – A new World Bank Group (WBG) working paper, Towards an Integrated Market for Seeds and Fertilizers in West Africa, examines the region’s efforts to build integrated regional markets for seed and fertilizer. After extensive consultations, new regional regulations based on advanced international standards for seed and fertilizer have mostly been agreed upon and are already helping to guide quality improvements in some countries.

For farmers in West Africa, the high price of fertilizer and seeds, their limited availability and their poor quality are major barriers to agricultural growth. To increase farmer choice, improve buyer confidence and otherwise make crop industry trade easier, faster and cheaper, West African governments have been working together through the Economic Community of West African States (ECOWAS) and other regional bodies for several years to develop harmonized trade rules and quality control procedures.

Background:
This working paper is the result of numerous consultations with seed, fertilizer, and regional trade experts in West Africa who generously gave their time for interviews, for sharing data, and for answering questions after the country visits. The work was undertaken as background to a larger World Bank volume on “Regional Food Staples Trade in West Africa” led by Jean-Christophe Maur and Ben Shepherd as part of an agreed joint work program with the ECOWAS and UEMOA Commissions.

This work was funded by the UK Department for International Development under the Support to West Africa Regional Integration Program (SWARIP) window of the Multi-Donor Trust Fund for Trade and Development supported by the governments of the Netherlands, Norway, Sweden, Switzerland, and the United Kingdom