This was presented at a conference in Bern, Switzerland, (20–22 August). It looked at PhD alumni of the Swiss National Centres of Competence in Research (NCCR) North-South Programme, which is hosted by the University of Bern.

The NCCR programme has trained 112 PhD students over the past 12 years, in areas including health, natural resources and poverty, with the aim of contributing to sustainable development and capacity building.
The Swiss National Centre of Competence in Research (NCCR) North-South is an international research programme on global change and sustainable development. One of the NCCR North-South’s goals is to improve research structures in Switzerland and in the South. To this end, the NCCR North-South provides research funding and training for Swiss and Southern PhD students, among others.

The present report is based on a survey of 83 NCCR North-South alumni – former PhD students – conducted in an effort to ﬁ nd out whether the NCCR North-South’s aims were achieved, speciﬁcally with regard to capacity development and career building. All alumni were informed about the planned survey and asked to conﬁrm their email address in July 2011.

The participants in the survey came from 27 different countries: about half were from Switzerland, Germany, and France, while the other half came from 24 countries in Africa, Asia, and Latin America.

Alumni from Switzerland overwhelmingly had backgrounds in geography and other earth sciences. The social and political sciences, as well as agriculture, environmental studies, and forestry were more frequent in the South than in the North. As a discipline, economics was almost entirely missing from the picture. This stems from the thematic composition of the NCCR North-South research consortium.
In cases where alumni did not respond, the authors contacted their colleagues or supervisors to obtain their current address. Further, some alumni were located via Facebook and other social media. By the end of 2011, the authors had valid addresses for 111 of 112 alumni: there was only one alumnus who could not be located. Of these 111 alumni, 83 completed the questionnaire. A rafﬂe (three $100 Amazon gift cards) was organised to incentivise participation. All statistics were performed using SPSS 18 EM.

Excerpts from the report:

Claudia Michel, a researcher at NCCR and one of the report’s authors, told SciDev.Net (see below: related article) that the findings appeared to conflict with a widely held belief that North-South partnerships can lead to a brain drain, and favour students from higher socioeconomic backgrounds. The survey data dispels these myths, she said.

Sarah Ayeri Ogalleh, a Kenyan PhD student on the NCCR North-South programme, told SciDev.Net that most southern researchers want to remain in their home country because of their families and a desire to boost a country’s development. Ogalleh added that the NCCR programme has helped students remain at home through capacity building and linking them withnetworks and partnerships that continue even after a student leaves the programme.

Sarah Ayeri Ogalleh graduated from a Bachelor Programme in “Animal Production” at Egerton University in Kenya. She later obtained her Masters Degree in “Environmental Science” and wrote her Masters thesis on ‘Status of On-Farm Tree Establishment and Factors Affecting Tree Planting: The Case of River Njoro Watershed, Nakuru District, Kenya’. She is currently pursuing her doctoral degree on ‘Assessment of local agronomic practices (characterization, effectiveness, sustainability) in small scale agriculture as building blocks for Adaptation to Climate Change in Laikipia District, Kenya’ (supervised by Christian R. Vogl, Michael Hauser). This study intends to identify the existing local agronomic practices used by smallholder farmers to adapt to climate change. The project will also highlight the economic, social and ecological sustainability of the identified adaptations for appropriate policy recommendations. Sarah Ayeri Ogalleh receives a scholarship from OEAD for her doctoral study.

More research is needed on the specic contexts in which researchers in the global South are embedded, especially regarding the relevance of science in local policymaking, the relative standing of researchers and universities in society, and the obstacles to pursuing a PhD, particularly for Southern women. 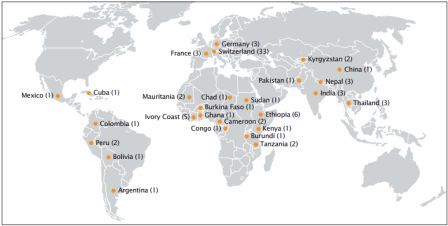