10 August 2020. “The Royal Society Africa Prize 2020 is awarded to Dr Steven Runo for elucidating pathways for long distance RNA trafficking between parasitic plants and their hosts and identifying and developing transgenic protocol for characterising and validating candidate host and parasite genes,” the Society said in a statement.

The award comes with a cash prize of British Sterling Pounds 15,000 or Sh2.1 million for research plus additional personal cash award of British Pounds 2,000s (Sh280,000) and a bronze medal. The prizes will be awarded in London later this year.

Prof Runo is the head of Biochemistry Microbiology and Biotechnology Department at Kenyatta University. His specialty is plant molecular biology. A mouthful, one would say, but which in plain terms means studying the nutrients of plants and using that knowledge to change their biological composition and make them resistant to weeds.

The research is on the use of plant nutrients to kill parasites. In scientific terms, it is about controlling parasites using what they call RNA interference. And the parasite in question here is Striga, the pink coloured weed that kills maize, sorghum and millet and largely prevalent in western Kenya. The other name of the parasite is witchweed, literally and appropriately, a killer plant. 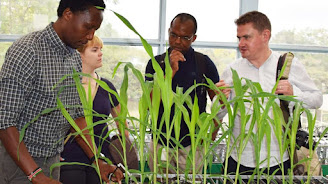 Striga attacks
The research is concentrated on sorghum, maize and millet, main food crops around the country, but which are vulnerable to Striga attacks. According to agricultural research, Striga is one of the most lethal weeds.

According to Prof Runo, parasitic plants establish what is called vascular connection with the host plant through structures termed haustoria, which allow acquisition of water and nutrients, often to the detriment of the infected host.

The parasitic plant extracts the nutrients from the host plant, either killing it or rendering it unable to produce crops. That is why when Striga strikes a maize farm, for instance, it will strangle the crop and leave the farmer without any yield.

“What we do is gene editing, where we study the nutrients that parasitic plants like Striga suck from the host plants and from that, we develop similar biological nutrients, inject them in the host crops and ultimately kill the parasites,”says Prof Runo.

The concept, he explains, is similar to what doctors do; that of gene editing. It involves examining the composition of one’s DNA and developing similar elements that are injected into human beings to give them immunity against viruses that cause diseases, such as polio vaccination.

“The overall objective of our research is to achieve food security,” says Prof Runo. “We have been working with seed companies to develop crops that are resistant to parasites based on the research we have done.”