13-16 December 2019. Sharm el Sheikh, Egypt. A session of the third World Youth Forum (WYF) ‘Food Security in Africa: How do we achieve the second of the sustainable development goals (SDGs)’ discussed food security as a cornerstone for sustainable economic growth. The session shed light on nutritional behaviour, on obstacles hindering the achievement of food security, on nutrition improvement, reinforcement of sustainable agriculture, and the impact of conflicts, climate change and water scarcity on food security.
was entitled

Extract of the programme

15/12 Panel Discussion: Food Security in Africa: How Do We Achieve the 2nd Goal of the Sustainable Development Goals 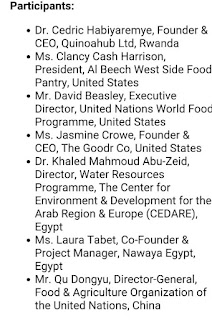 During the session, David Beasley, Executive Director of United Nations World Food Programme, highlighted the damage from human conflicts, climate change and terrorism in contributing to global hunger.
“The number of chronically hungry people worldwide hit 821 million in 2018, up from 777 million three years earlier. The countries that suffer most from the risk of famine are Somalia, South Sudan and Yemen, as well as Nigeria’s northeast region. These countries and regions have been overwhelmed by conflict for years, forcing tens of millions to flee their homes. Disruption of lives impedes the production of food, thus causing famine and hunger.”
Director-General of the FAO, Xu Donyo said that hunger rates all over the globe were increasing due to undernourishment and absence of food security in Africa and the Middle East.
“There are 1.6 billion young people in Africa who were under the age of 35. Those young people represented 85% of the continent’s population meaning that Africa’s future was filled with opportunities for young adults who could work and produce food. Health rates are deteriorating among children and young people, due to the difficulties faced by families of the African continent. Several countries in the region were concerned about the health of young people but the countries where problems and conflicts were widespread, such as Syria and Somalia, did not care about their young people.”
The Minister of Youth and Sports of Rwanda, Rose Mary Mobizi, said that countries must provide serious care as to how to maintain a balanced consumption of lunch, noting that food security is the most important security there is.

“In order to achieve food security, we need to empower women, who constitute more than half of African society. In many African countries, there are many women who take over the management of the family, therefore we must provide them with the environment necessary to achieve food security. Rwanda seeks to support youth and provides special programmes for their participation in achieving food security in Rwanda and to support their working in agriculture. With “Every 1% increase in hunger there is a nearly 2% increase in migration.”

Ms. Laura Tabet (picture), Co-Founder and Project Manager at “Nawaya” Egypt, introduced the concept of ‘innovation desert’, as a way to make agriculture attractive to youth. 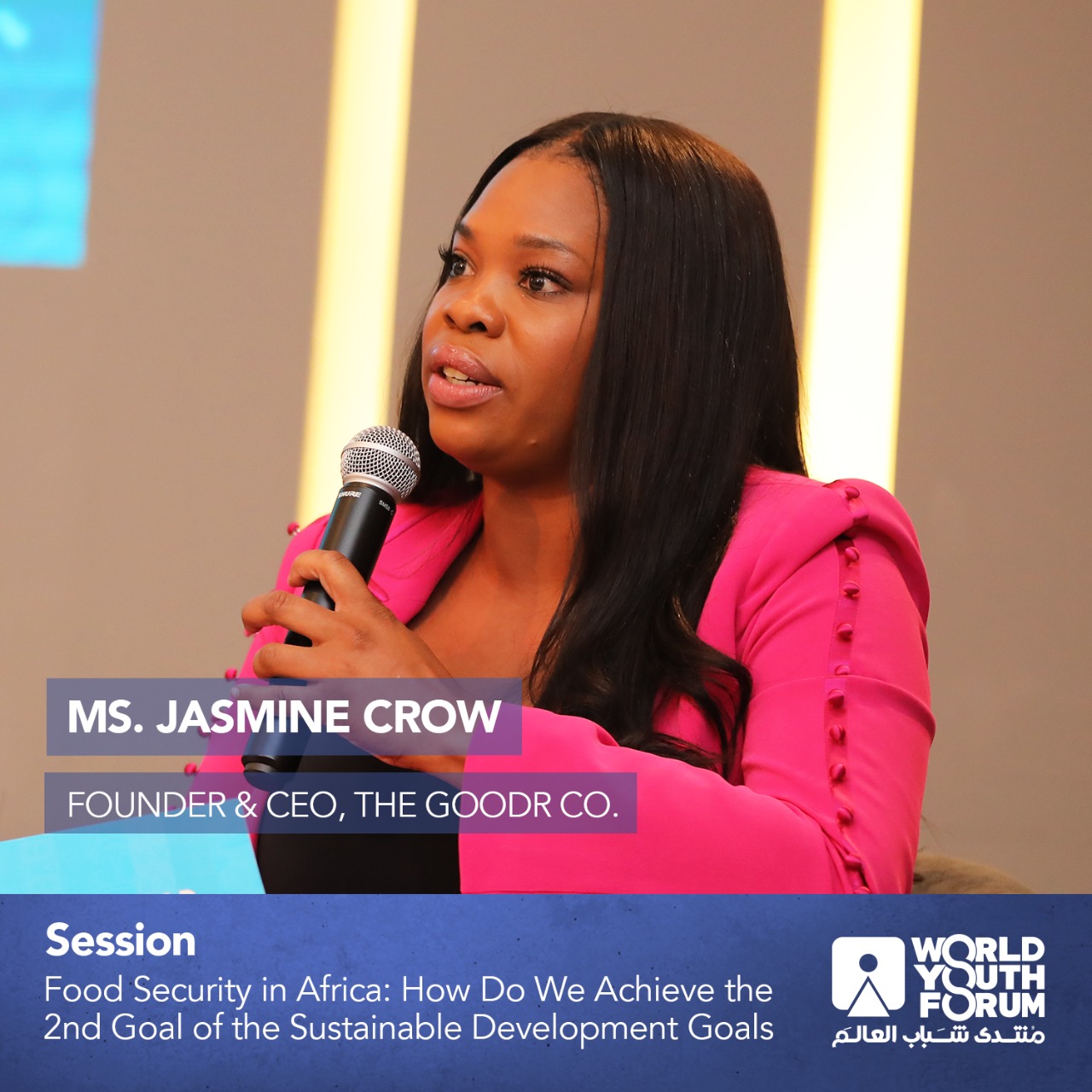 Jasmine Crowe is a docu-series producer and entrepreneur whose projects addressing hunger and poverty, and access to quality education have positively impacted vulnerable communities in more than 20 U.S. cities, the United Kingdom, and Haiti. Specifically, the Sunday Soul Homeless feeding initiative has successfully fed more than 50,000 and led to the founding of social technology enterprise Goodr in 2016. Under Jasmine’s leadership, Goodr has redirected more than 100,000 pounds of excess prepared foods — in addition to fresh fruits, vegetables, and other supplies — to communities in need since 2016.

On December 13th the World Youth Forum’s (WYF) pre-forum workshops which were held before the forum’s official inauguration on December 14th, discussed several topics. Young people from different countries and backgrounds participated. Among these were ‘International Food Security: Youth’s Initiative for Action’, which discussed the right of all people at all times and in any place to have the right to physical, social, and economic access to sufficient, safe, and nutritious food.

Session of the Union for the Mediterranean – Employment and youth in the Mediterranean region,  business development and entrepreneurial skills.
16 December 2019, Sharm El-Sheikh, Egypt. The first Model UfM, which took place at the third edition of the World Youth Forum, engaged over 90 young people of 43 different nationalities from around the globe, allowing them to exchange views and recommend initiatives to decision-makers and influential figures. The event was attended by a wide range of participants that debated key topics for their generation around the globe namely employment and climate change, in a simulation of UfM Ministerial Conferences.

The topics covered during the forum are considered transversal in all of UfM’s endeavours, as Youth in the MENA region has reached 60% of the population, and the Mediterranean region is warming at an alarming rate of 20% faster than the global average, as presented recently in the first-ever scientific report on the impact of climate and environmental change in the Mediterranean region. The UfM collaborated with the World Youth Forum, and interacted with key actors on youth, with the aim of promoting the role of young people in societies in the Euro-Mediterranean region, as well as to complement the ongoing process to develop the UfM Youth Strategy.